The LRDG (Long Range Desert Group) was a British unit which served in North Africa during WWII, performing reconnaissance and raiding duties. Their command cars were trucks which had been modified with weaponry, and proved to be a thorn in the side of German units in the area. Now, this comprehensive set, done in collaboration between Tamiya and Master Box Ltd., lets you create your own diorama with 7 figures in realistic poses, a vehicle and accessories all thrown in one box! 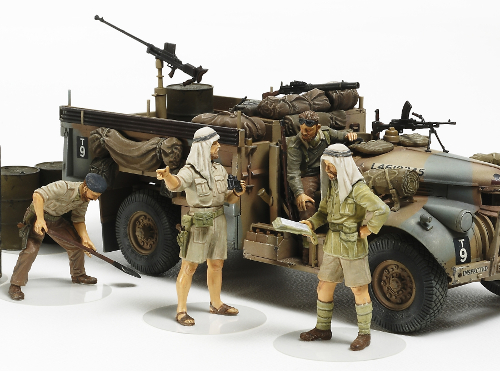 
The Marder III M which was armed with a 7.5cm Pak40/3 gun and was used on all battlefronts by tank destroyer units, is now part of our Military Miniature Series. The unique form of the Marder with its combat compartment placed to the rear has been recreated in superb detail along with the main gun, ammunition rack and radio equipment. Don"t miss this excellent model and add this historically important Tank Destroyer to your collection!

During WWII, the German Army produced and operated the Marder III series, which was equipped with the Czech built obsolete 38(t) tank chassis, to combat the Soviet T-34 tanks. First version of Marder was armed with improved spoiled Soviet 7.62cm Pak36 anti-tank cannon which was replaced with German 7.5cm Pak40 gun on H version, and the last version, the Marder III M was put into production in May 1943. Unlike former types the M's cabin was transferred to the rear by mounting the engine in the middle, and a 7.5cm Pak40/3 was also employed. 942 M's were produced until the thoroughbred tank destroyer Hetzer assumed much of the Marder's role.

Total length: 149.5mm
The particular form of the Marder with its combat compartment placed to the rear has been recreated in superb detail.
The 7.5cm Pak40/3 main gun, ammunition rack and radio equipment have been accurately reproduced.
Characteristic sprockets and idlers have been replicated.
Muffler cover comes as a photo-etched part.
One figure and decals for 5 different markings for armor from various battlefronts are included. 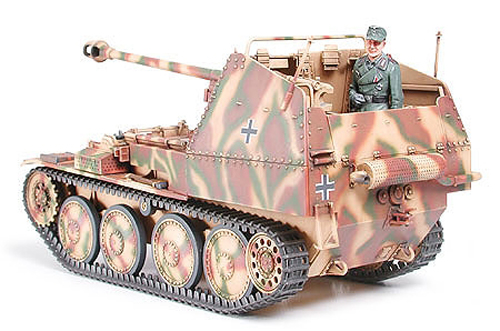 
This model kit recreates the U.S. Self-Propelled Howitzer M109A6 Paladinin in 1/35 scale. The kit itself is from the Tamiya-Italeri series. It further updates the original release from 2012 with more molding improvements, brand new parts, and even photo-etched parts included! Of course, it also includes Tamiya figures, accessories, full instruction manual, and decals, all packaged in a new Tamiya box! 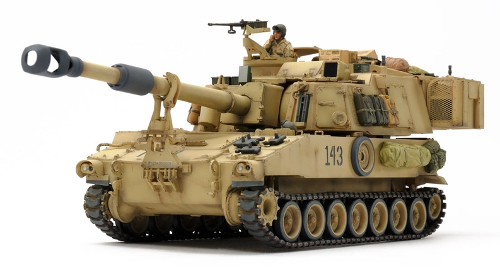 
This Military Collection series product takes the modern ICM P204(f) armored railway vehicle kit and pairs it with Tamiya contents such as two figures, accessories, and decals. The subject is the P204(f), which was an armored railway vehicle that German forces made by converting commandeered French AMD35 road vehicles. P204(f)s were used on railway lines on the Eastern Front, mainly given a watching instruction but sometimes involved in seeking out enemy presence. 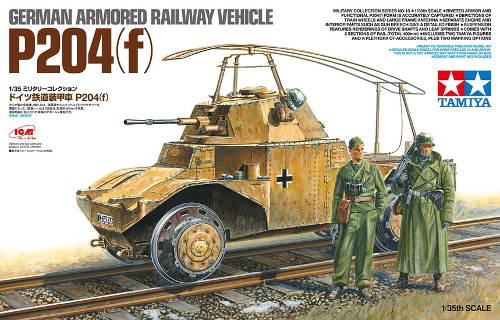 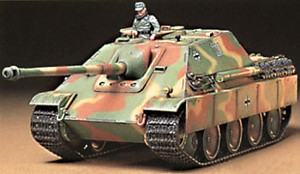 This is a 1/35 WWII German Jagdpanther Tank Destroyer from Tamiya.

It's regarded as one of the best tracked weapons systems of WWII.  The
production started in Jan 1944.  The late version has a larger bolt-fixed gun
mantlet collar and larger diameter idler wheels.


Despite the serious teething problems in its mechanics, the British Infantry Tank MK.IV or the "Churchill" went on to earn a high reputation among the WW2 British armored fighting vehicles. Following the tradition of the rhombic-shaped predecessors during WW1, its design priority was placed on heavy armor, a wide trench crossing capacity and the ability to travel across the shell-torn battlefields. Speed was not considered to be essential, since its main role would be to escort and support the infantry. Christened the "Churchill" after the Prime Minister of England, it began to arrive at the Tank Regiments in June 1941. The Churchill tank stable is classified into several types according to the main armament used, or the hull and turret construction. The MK.VII was radically different from the earlier models, with the hull and turret completely new in structure. The entire hull was welded, rather than being riveted. The maximum armor thickness was increased from 102mm to 152mm. Consequently, the weight augmented to 40 tons, resulting in a reduction in top speed from 18 to 13 mph. The turret was redesigned for higher strength and improved productivity. The four walls were a single casting of varying thickness, onto which the roof plate was welded. The powerful 75mm gun was adopted as the main armament. The active service of the Churchill tanks, especially from D-Day onwards, is worthy of the name of the principal British tank. 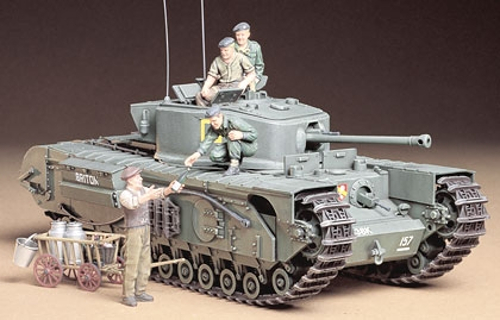 
Over 50,000 Shermans of all types were produced during WWII. The Shermans which the IDF (Israeli Defense Force) initially procured from various sources were a mix of different variants featuring different hulls, turrets, suspensions, and armaments. However, Israel was eventually able to negotiate the purchase of about 250 M4A1 and M4A3 Shermans from France, and these were armed with the M1A1/A2 76.2mm main gun which could better counter the Arab armies" Russian made T-34-85s. Shermans were also produced with two different types of suspension: VVSS (Vertical Volute Spring Suspension) and HVSS (Horizontal Volute Spring Suspension). The latter offered better performance and the IDF eventually modified their tanks to the HVSS standard. Thus the IDF designated its 76.2mm gun-armed HVSS-equipped Shermans as M1 Super Shermans and many of these saw their first action during the Sinai Campaign in 1956. 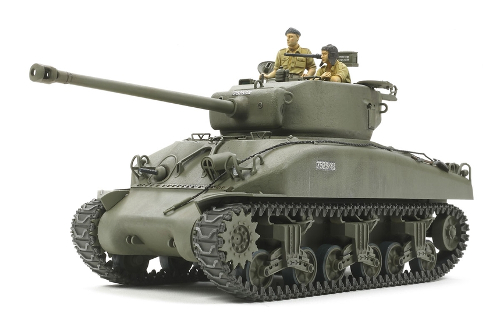 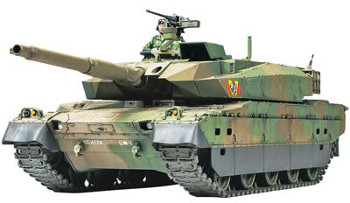 This is the 1/48 Scale JGSDF Type 10 Tank
Plastic Model Kit from the Tamiya Military Miniature Series.
Suitable for Ages 14 & Older.


The M113 is one of the vehicles most widely used in non-communist countries of the world and is showing activity as transport for infantrymen of free nations. Among the important features of the M113 are smallness, lightness, and therefore easiness to use. It is designed as a light armoured personnel carrier for transporting 13 fully armed riflemen including the driver, but also serves as a cargo boat, ambulance, weapon carrier, command car and reconnaissance car. 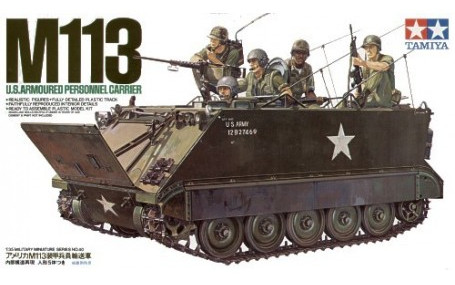 
This is the 1:48 Scale US M20 Armored Utility Car Plastic Model Kit from the Tamiya Military Miniature Vehicle Series.


This is a highly detailed model of the WWII German tank destroyer Nashorn. The full size vehicle featured an 8.8cm gun also known as a PAK 43 and it was fitted to the upper surface of a light turret less chassis. Even though the vehicle was lightly armored, the PAK43 weapon was capable of penetrating 190mm of armor at 1,000 meters. The Nashorn saw action with German heavy antitank battalions fighting Soviet and Allied forces during much of the conflict. Due to its relatively low cost and superior mobility compared to heavier tanks it remained in production until the end of the WWII war.

The model accurately recreates the powerful form of the Nashorn, thanks to detailed research performed using an actual example of the vehicle in a museum in Russia.

Features faithful reproductions of the 71-caliber 8.8cm gun and complex fighting compartment.
Metal parts are used to ensure that the gun has authentic movement and weight.
Comes with 3 marking options, including winter and Eastern front versions.
4 included figures depict driver and 3 crew members in a variety of realistic poses. 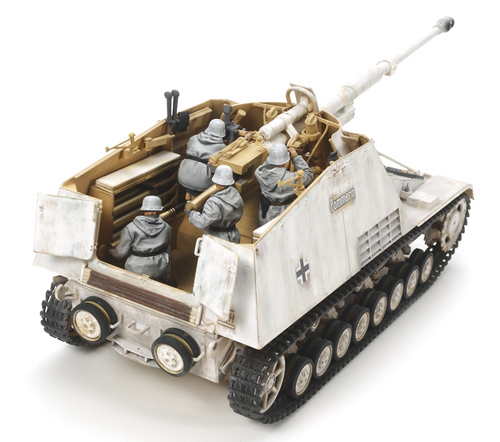 Tamiya presents a plastic assembly kit for the M113, a veteran Personnel Carrier that played an important role in the 2003 Iraq War. With the fear that important supplies would not reach the advancing U.S. personnel, the U.S. army called on the reliable and mobile M113. This detailed replica of the actual carrier also features extra attachments such as personnel equipment and ammunition cases.
Of the various M113 type personnel carriers developed, the M113A2 began production in June 1979. Based on combat experience in Vietnam, this version was made with improved transmission, operating equipment and cooling system as well as reinforced suspension. Detachable fuel tanks were moved to the rear and external sides of the vehicle, smoke dischargers were mounted on the front, and the trim vane was enlarged. M113A2 units were deployed to the Gulf War in 1991, and in the 2003 Iraq War. The most recent M113A2 active in Iraq was also equipped with Combat Identification Panels (CIP), the latest friend and foe recognition device to prevent friendly attack.
Overall length 153mm
Large trim vane, smoke shell launcher, and external fuel tanks have been accurately replicated.
CIP attached on both sides.
Gun shield can be attached to M2 machine gun.
Plenty of extra attachments including personnel equipment and ammo cases.
Commander and driver figures included Decals for 3 different vehicles deployed to Iraq and one vehicle deployed to Bosnia-Herzegovina.

Apart from decals for the vehicles deployed in the Iraq War, 1 set of decals for the NATO vehicle deployed to Bosnia-Herzegovina is also included in the kit. To accurately replicate the vehicle we recommend using Tamiya"s NATO Green, NATO Brown and NATO Black colors. 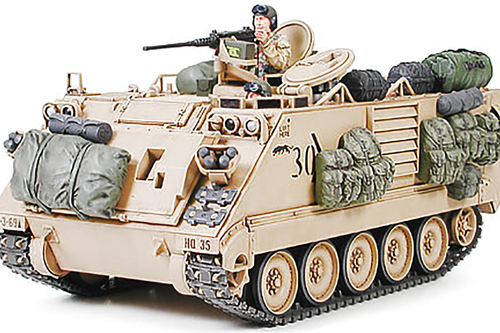